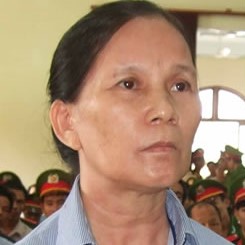 Do Thi Hong was released over four years early from prison, in November 2020.

Do Thi Hong is a member of An Dan Dai Dao, a Buddhist sect founded in 1969 but outlawed after the Communist regime took over South Vietnam in April 1975.

She is one of 22 members of An Dan Dai Dao Buddhist sect arrested in February 2012 under Art. 258 and tried under Art. 79 of the 1999 Penal Code by Phú Yên People’s Court in January 2013, in what is called the "Council for the Laws and Public Affairs of Bia Son" affair. The group was charged with subversion and accused of writing documents critical of the government, setting up two companies and investing in an eco-tourism park as a cover for recruiting supporters. However, those affiliated with the group maintained that the activities of the group were purely religious and that the authorities interpreted their religious teaching in political terms. Human rights groups and supporters consider the arrests a repression by the State of the peaceful religious group.

Do Thi Hong was sentenced to 13 years’ imprisonment with five years’ house arrest on release. She was detained at Prison Z30A, Section K5, Xuân Lộc, Đồng Nai Province, but is now at a prison in Binh Phuoc province. She is reported to be in poor health.